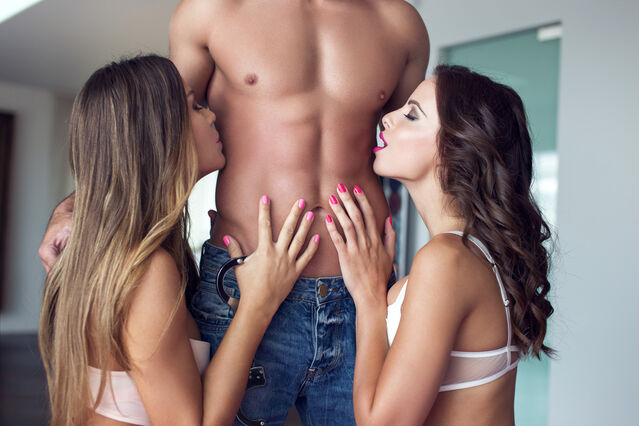 Liz’s birthday was tiresome and dull.  But Mark reminded her that 40 is the new 30, and Liz trusted that – I mean, her 20-year-old niece seemed to demonstrate that 20 is the new 10!  But Liz wanted to feel 30, not just think it.  She wistfully remembered college, and the freedoms she enjoyed back then.  Even early in their marriage, she and Mark would still get wild.  They had a few threesomes…. Yeah, they enjoyed their share of outrageous. How had life had gotten so serious so fast??

Out on a jog, Liz got a brilliant idea.  She saw a thing recently on TV about sex robots.  She and Mark should get one!  She excitedly ran back home to see what he thought.  When she broached the topic, he responded with an instantaneous YES!  (Almost too enthusiastic, in her opinion).  They got online that evening and created her.  Mark pretty much stayed out of it, let Liz make all the decisions about hair color and breast size and stuff.  Just picking out their new sex partner, who they named Roxy – the name Liz had given her first sex toy – gave Liz the rush she was looking for.  What a marvelous idea!

Roxy arrived within a few weeks, and Liz and Mark promptly carried her upstairs and plugged her in.  She had to charge for a while and get all of her downloads before they could turn her on.  (Liz thought that Mark seemed a bit too excited about Roxy, but whatever).  It was time to get crazy, join the robot revolution!

Sex robots will undoubtedly offer society many advantages.  Obvious beneficiaries will be those in need, either physically or emotionally.  Sexbots might first be presented to disabled individuals missing sexual contact, or elderly people who have lost a beloved spouse.  Our extended life expectancy increases the odds that we all will spend time unattached, thus making space in our beds for an automated lover.  Having a soft, humanoid form lying nearby at night could be quite comforting.  What about mentally challenged or socially anxious folks who have been unsuccessful at finding a suitable sex partner?  Some people like sex but they don’t necessarily like other people.  Like Lars in Lars and the Real Girl, a sexbot may offer opportunities for socializing and enhancing self-esteem.  Those who find the company of others to be anxiety provoking if not downright uncomfortable, such as some folks with autism spectrum disorder, may find the perfect lover in a sexbot.  People geographically isolated will benefit, such as those stationed at remote military bases, or simply living in countries where there are unequal numbers of males to females.  In general, folks who have found it difficult to attract a lover for whatever reason will find a willing and enthusiastic companion with a sexbot.  Like Liz and Mark, couples seeking to add interest to their sex lives will support the sexbot market.  A sex robot could add creativity to their sex lives without the risk of STI’s or jealous partners.  People seeking an acceptable alternative to a non-monogamous commitment may find added variety and fulfillment with a sex robot.  After all, is sex with a robot really cheating?

Finally, it is hoped that the availability of sex bots will decrease the demand for sex trafficking.  Human trafficking is considered the fastest growing crime world-wide, and it is estimated that sex trafficking generates hundreds of millions of dollars annually in the US alone.  Saving people from the horrific fate of sex trafficking would render sex robots truly invaluable.

In spite of these many benefits, there will certainly be losers in this game of clones – an awkward topic that I’ll explore in another blog post.  The many complex issues raised by humanoid lovers who are always ready for sex and willing to do anything between the sheets has resulted in the Campaign Against Sex Robots – a movement seeking to completely stop their production. Sexbots are more than science fiction, and they are among the most controversial inventions we will be confronting in the next few decades.  This is a conversation worth starting.  With consciousness and education, we can orchestrate a more optimistic and sexually satisfying future for us all.