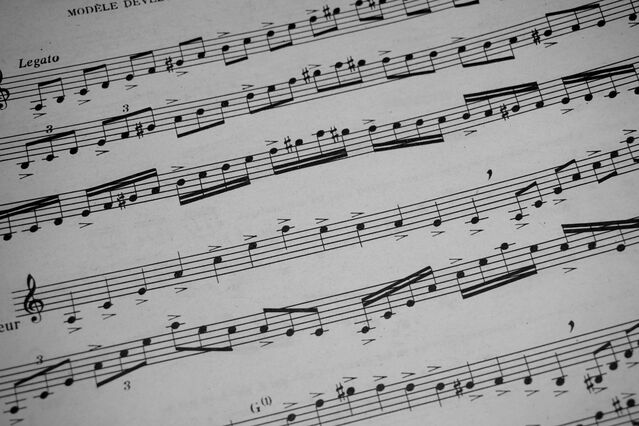 Who Controls the Soundtrack in your Head?


As I sit to write this blog, my brain is multitasking.

My most prominent thoughts relate to the task at hand: how should I compose the next sentence? What am I trying to communicate in this paragraph? How will I use scientific research to back up my conjectures?

While these thoughts bounce around my head, my inferior frontal gyrus is turning them into words, letters, and strokes, and my motor cortex is directing my fingers to write the words down on the page. At the very same time, I notice I am shaking my leg — something I am prone to do when I’m immersed in a task. I am also perceiving auditory and olfactory sensory information around me; the beeping of the garbage truck doing the rounds on my block, the rustling of leaves outside the window, the fresh smell of apples in the fruit bowl next to me.

And as a backdrop to all of this mental activity, there is also a steady beat, a melody that sets an imaginary soundtrack to my conscious experience. My current earworm happens to be Champagne Supernova, by Oasis, and it has been playing on loop in my head for at least ten minutes. But why? How did it get there? And what keeps it going?

Although people have reported experiencing earworms for a long time, scientific research on these internal musical experiences has emerged only in the last decade or so. Referred to in the literature as Involuntary Musical Imagery (or INMI), earworms are reportedly experienced by at least 60% of people on a daily basis, and by over 90% on a weekly basis (Liikkanen, 2012). However, the prevalence of earworms may be even higher than that, early studies were based on retrospective reports.

More recently, researchers have used experience sampling to assess the dynamics of earworms in everyday life. In a study by Floridou and Müllensiefen (2015), participants received randomly timed notifications on their smartphones several times per day where they were asked to report whether they currently had an earworm, what song it was, whether they knew what triggered it, and what activity they were engaged in at the time.

The proportion of time participants reported experiencing an earworm upon receiving a notification was 47% — this means that on average, at any given moment of the day, about half of us are experiencing music in our heads. This data suggests that the vast majority of us likely experience many earworms each day. Furthermore, the researchers found that activities that did not require much thought (e.g. walking, traveling, housework, exercise, etc.) were associated with higher numbers of reported earworms, compared to activities that involved higher cognitive load, such as socializing.

Furthermore, participants reported that recent musical exposure was most often the trigger of their earworms, but in about 20% of cases, participants had no idea what the trigger was. The means that a lot of the time, we have music in our head but we don’t know how it got there.

Other experience sampling studies have investigated how accurate earworms tend to be relative to the original recording. For example, when I’m hearing Champagne Supernova in my head, is it in the right key? Is the rhythm correct?  In a study by Jakubowski and colleagues (2015), participants were asked to tap to the beat of their earworm using a wrist-worn accelerometer. This allowed researchers to not only compare the rhythm of the earworm to the original song, but also investigate what factors can impact the tempo. Although earworm tempos tended to be veridical on average, there was a significant effect of mood, specifically subjective arousal. The more aroused participants reported feeling at the time of the random notification, the faster the earworm tempo tended to be.

Although some factors contributing to earworms have been identified, many questions still remain: Why do earworms loop on short segments of a song? Does the length of the loop vary with the activity or cognitive demands? And why is it so difficult to mute or “turn off” an unwanted earworm? A recent study suggests that once an earworm is initiated, people have considerable control over its properties; for example people changing the pitch of the song, the voice of the singer, the tempo, and even the song itself (Cotter & Silvia, 2018).

So the next time you find yourself stuck on a particularly annoying earworm, rather than try to suppress it or ignore it, try to let your mind simply advance to the next track.